A rescue squirrel called Turkey has won hearts across the web, following an image of Turkey touching hands with his old caregiver was shared on social media.

The video was posted to TikTok on Monday by Cindy Jenkins (@pipthebabysquirrel), Turkey’s “Momma.” The post has racked up over 4 million viewers and 500 000 views.

The video was made by Jenkins and begins with her advancing Turkey which is seated on the ground in front of the car that is parked. 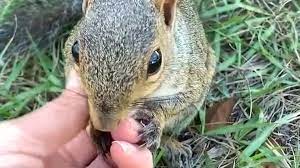 “Well hello,” says Jenkins from behind the camera while she squats in front of Turkey. “Were you just waiting for me, Mr. Turkey-butt?”

She begins to stroke the squirrel, and then asks “Whatcha doing, precious? What’s been going on today?”

“Turkey is a rescue squirrel who was released with his sisters about a year ago. They’ve all stayed close by, have nests and babies,” Jenkins explained to Storyful. “Turkey is sweet and mellow, and although he’s a wild squirrel now he still loves his Momma.”

According to the Humane Society of the United States The young squirrels who continually come up to people are likely to have been left behind by their mothers.