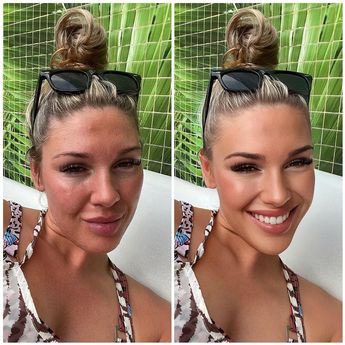 Holly Cockerill has shared a series of ‘extreme’ before and after pictures that show the reality of ‘perfect’ social media pictures, as she said she ‘can’t cope’ with the difference

A woman has shown the reality behind ‘perfect’ social media pictures by sharing a series of ‘extreme’ before and after snaps.

Makeup artists Holly Cockerill regularly shares edited images with her fans on social media to highlight how quickly and easily a person’s looks can be changed.

Holly, from Blackburn, has now shared a series of composite images, with her “real” self next to the highly edited versions – and the end result is shocking, as the Liverpool Echo reports.

In many of the images, Holly looks normal in the first picture but she is completely unrecognisable in the edited version of the image, with her mouth, hair, and face transformed.

Captioning the side-by-side photos, Holly said: “Back at it with another INSTAGRAM VS REALITY and I can’t actually cope with that second picture.

“I wanted to see if I could somehow salvage it and I didn’t think it was possible, my god wasn’t expecting that.

“I still get flabbergasted by how much you can change your image to make it ‘perfect’ so you can fit in with what society deems ‘beautiful’ now. 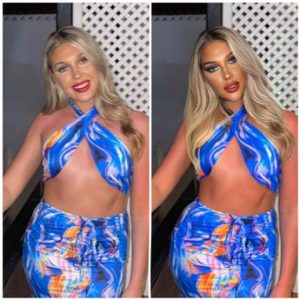 “To all the girls who feel like they need to do this, YOU DON’T! The less you compare yourself to other people the happier you’ll be.

“Instagram is just a competition to see who looks prettier, who’s body is sexier, who has more likes and it’s driving young girls to use apps like this to achieve it.

The post has amassed more than 4,000 likes and was shared by Coronation Street actress Lucy Fallon, among many others

Many people commented on the “extreme” photos.

One said: “Thank you for sharing!

“Shame on anyone who edits to this extremity. They really don’t realise the damage they cause to young people!! People could go and get surgery or all sorts because of this false sense of reality, heartbreaking really.