‘Luca’ preaches the value of being yourself

Pixar is a casualty of its success. After a series of truly transcendent films like the Toy Story series,”Inside Outside,””Coco,” and most recently”Soul,” it’s something of a let-down to watch somewhat more earthbound fare such as Pixar’s newest. “Luca” is a totally fine animated movie, full of Pixar-worthy computer cartoon of a wondrous Italian coastal village. It is just that it lacks the profundity of Pixar’s best. 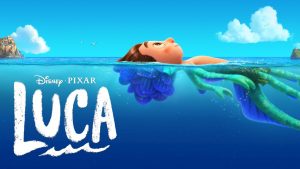 No matter, though. Let’s not let perfection, as they say, be the enemy of the good.

Luca is a typical adolescent sea monster. You understand, chafing under the watchful eyes of his parents and yearning to be liberated to explore the external world above water. His parents are continuously warning him about the dangers of going to the surface, that land monsters will”murder” him. “Curious fish have caught,” they intone.

But as with most children, curiosity gets the better of Luca and he soon runs into another young sea creature, Alberto, who is mastered the tricks of life on earth. Alberto insists”Everything good is above the surface — atmosphere, gravity, the sky, the sun, and human stuff.” Little known fact: if a sea monster moves on land he takes on human form. Only when he gets moist does his sea monster kind return.

Once on property, Luca has to learn the simplest of individual tasks, like how to walk, for example, not easy for a life-long underwater creature.

But what he mostly learns is how to hide his true individuality among humankind. Much of the movie includes Luca and Alberto dodging dangerous scenarios where their true selves are threatened with exposure. On the way, they combine forces with a spunky human girl, Giulia, to defeat the insufferable bully of the town. As luck would have it, Giulia’s father is a fisherman who searches sea critters. Thus, peril is constant.

A lot of the narrative moves along predictable paths and develops predictable topics — the worth of friendship, hard work, and a little risk-taking. On that last point, Alberto instructs Luca to face up to his inner critic and say,”Silencio, Bruno!” Whenever uncertainty creeps in. Who knows but who cares, it seems to work. And most of all, the film preaches the value of being yourself, whether that’s being a sea monster, a person, or both. Not exactly groundbreaking stuff, but relatable to teens everywhere