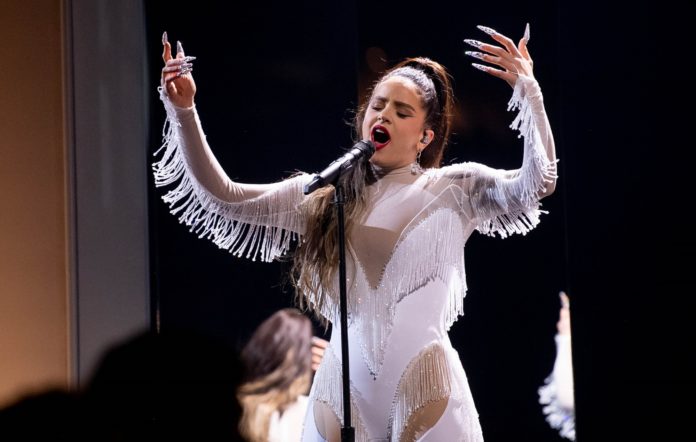 Rosalia shared cover art for her upcoming album Motomami, which has yet to be released. While the artist isn’t sharing a release date for the album, she did reveal the theme and encouraged fans to guess. In December, Rosalia teased a new song in a video that she shared on TikTok. The cover art for the album also revealed that the song will be on a motorcycle.

The album is named Motomami, and is the follow-up to Rosalia’s 2017 release ‘El Mal Quererer’. The album features the hit single ‘La Fama’ featuring The Weeknd and Danny Trejo. While Rosalia has yet to reveal a release date, the artist has shared the artwork of the album. The cover features Rosalia nude against a white background wearing a motorcycle helmet. The text in the album’s title is displayed in graffiti-style red font.

Last month, Rosalia teased the cover of her upcoming album, and a song has been leaked ahead of the release. A video of the single was posted on TikTok, and the singer has confirmed that the new song is called ‘Soako’. Earlier this month, she also teased a new single, which will be released this week. The album will feature six tracks and is set to be released in 2022.

Rosalia has shared the album’s cover art and announced that a new song will be released this week. The album’s release date has yet to be revealed, but a new track is expected to arrive in three days. Currently, there’s no news on the release date for the album, but the song is a bachata with The Weeknd.

The Spanish Grammy-winning singer has shared the cover art for her upcoming album on her Instagram page, revealing that her new album is due this week. “The cover photo shows Rosalia with a motorcycle helmet on. She captioned the image with her name in red graffiti style. She also revealed that the album will feature the song ‘Glory’, which was originally released last year.