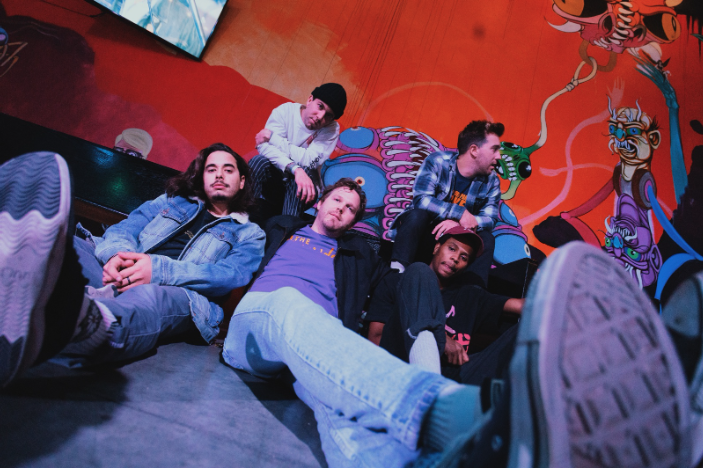 ​LA-based quintet, Sleeptalk, is no stranger to the scene. They have been creating music and performing on stages with bands like Twenty-One Pilots, since their debut album in 2017.

After years of honing their sound and spending the last few years in Joshua Tree, California creating their sophomore 11-track album Drown In A Rainbow, Sleeptalk has brought a new sound and distinct style that their fans and new listeners will love.

With their music amassing over 2 Million streams, features on MTV’s shows, radio play on the famous KROQ, and has caught the attention of notable tastemakers like Alternative Press, Vents, and Atwood Magazines. They’re here to stick around and they have a solid year of music for us.

The writers and musicians behind this album are members Anthony Fitzpatrick, Justin Melchor, Jason Fitzpatrick, Paul McGill, and Malik Dugan. They shared, “A lot of the inspiration came from sleeping in an RV day in and day out in the middle of nowhere with just the homies and no time constraints. We were able to really experiment in a multitude of sounds and tones that really played a big part in the album.”

Well, there is no doubt that they created some hits out in the desert. For me, the stand-out track in the number one slot caught my ear.  “Dripping Colors” is a visual palette of sound that’s crystal clear and full of vibrancy. Sleeptalk found an indie-pop sound that’s incredibly alluring without selling out the true indie sound we all love. The upbeat beats and full guitars topped with catchy lyrics and a fantastic vocal delivery with mesmerizing reverbed and echoed harmonies make this song a definite playlist add for all music lovers.

If you don’t already know Sleeptalk this release is a great door opener for a must-listen album. You will find the album on any of the streaming platforms.

You can follow their journey and catch them performing live by following their socials.

Before you go, check out the “Dripping Colors” official music video!