The Duchess is breaking her isolation with a tennis match.

Kate and Prince William were both present at the Wimbledon Championship tournament in London’s Ladies Singles Final match. The green sheath dress was worn by Kate with white pumps, while Prince William was wearing a blue-on-blue ensemble with a black tie. 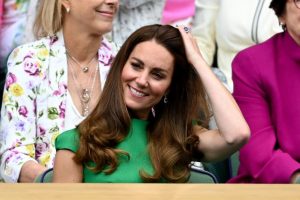 This public appearance comes nearly a week after the duchess, 39, self-isolated following contact with someone who had tested positive for COVID-19. According to Kensington Palace, the royal didn’t experience any coronavirus symptoms and instead followed government guidelines.

She has had both COVID-19 vaccinations and is currently being tested twice per week for the virus. Kate received her first vaccination at London’s Science Museum on May 28.

After the match, Duchess Kate walked onto to the field to greet Ashleigh Barty, the victor, who defeated Karolina Pliskova, 6-3, 7-6 (4), and 6-3.

Kate, a keen tennis fan, also attended previous Wimbledon matches during this year’s tournament. The duchess of Cambridge was seen watching a men’s doubles tennis match on July 2, and she also visited the tennis venue, meeting staff. She was seen wearing a mask while she prepared tea cakes in the kitchen during her earlier Wimbledon visit.

Wimbledon was cancelled last April when the All England Club stated that the Grand Slam tournament would be cancelled due to the risk of the coronavirus pandemic. This was the first time that the championships were canceled since World War II.

The tournament was back after a two year absence. There was a 50% attendance at the start and the Centre Court was full for singles finals.