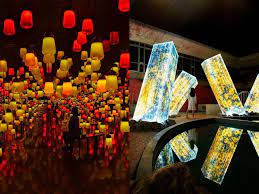 A waterfall that is entirely made of light flows onto a rock, while the glowing ripples from a Japanese digital art exhibition illuminate azalea trees.

After dark, light installations with blooming flowers, giant Koi Carp, and traditional calligraphy are brought to life, creating an ethereal atmosphere that blends nature and technology.

TeamLab’s latest offering is the show in Kyushu, in southern Japan.

They are known for creating stunning displays that combine projections, sound, and well-designed spaces. 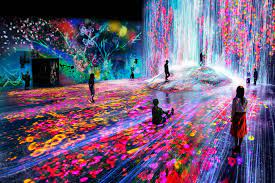 Takashi Kudo, a member teamLab, said that sometimes people believe digital art and nature are totally against each other at a media preview.

“But, at the same, we believe digital and nature can be merged easily, since our ‘paint is light.

“We don’t damage the natural world, so we don’t paint original trees and rocks… it’s going away in the daytime.”

The exhibition opens Friday and will run until November 7. It is located in a park whose borders blend into an ancient forest near Nagasaki.

Sensors concealed in a thicket azaleas detect people walking past and send a flashing, firefly-like glow through trees surrounding them.

Abstract lines of violet, green, and yellow light reflect off the surface of a pond as if they were reflecting from a canopy of neon lights above.

In an abandoned bathhouse, massive “megaliths”, which protrude from the ground, are brightly lit to contrast the darkness.

Kudo said that he hopes the exhibition, “teamLab: A forest where Gods Live”, will make people more aware of the beauty and fragility of the natural world.

“The leaves — It seems they are only green. But for us, it is a screen.”