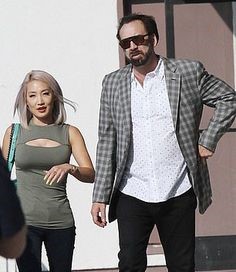 Nicolas Cage says he took his wife, Riko Shibata, to visit his tomb in New Orleans at the beginning of their relationship last year because he wanted to show her places that were “meaningful” to him.

“When you enter a new love, you want to show where you went to school,” Cage said. “‘This is my old neighborhood, I grew up in that house.'”

“New Orleans is like the other city I grew up in, so it was meaningful for me to show her New Orleans,” he continued.

According to Atlas Obscura, the “National Treasure” star bought two burial plots in a famous New Orleans graveyard in 2010 and used one to erect the large pyramid tomb, inscribed with the Latin phrase “omnia ab uno” (meaning “everything from one”). The tomb is typically counted among Cage’s famously elaborate (and eccentric) purchases, which also include two European castles, his own private island, and a dinosaur skull.

Shibata, who reportedly met Cage in Japan sometime in 2019 or early 2020, also took the actor to places that meant a lot to her (like the shrines in Kyoto), according to Cage.

Cage, who also talked to GQ about his “wonderful” new pet crow, told Entertainment Tonight on Wednesday that he knew his relationship with Shibata “could work” after finding out that she had pet flying squirrels.

Cage told ET’s Lauren Zima: “[Shibata] likes animals, too, so I asked her, ‘Do you have any pets?’ And she said, ‘Yes, I have flying squirrels.’ She had two sugar gliders… I thought, ‘That’s it. This could work out.””

Shibata and Cage spent most of the coronavirus pandemic apart, with Cage in New York and Shibata in Japan. The couple got married in Las Vegas on February 16 after getting engaged over FaceTime