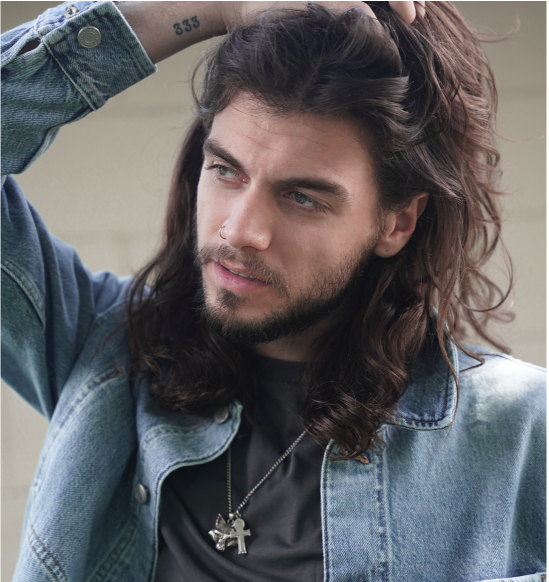 This artist is not new to music. Growing up in a home with musicians for parents, he started making beats in his bedroom at the age of 15. This led to his first album being released under the moniker Wolfi in 2017. Since then, Vernon has become an established songwriter and producer willing to take chances. With Wolfi having a strong fan base and millions of streams, he returned to his real name Emerson Vernon delivering a multi-genre project with an epic sound.

This is a new era of music for Vernon, and he says, “I really just wanted to establish a narrative with the upcoming music I’ll be releasing. My only hope is that my old following is still rocking with me regardless of style and name change. I want people to ask questions that can only be answered by the next song as well as the one preceding it”.

With his latest release, Fallen, he is entering a new arena.  Orchestra fueled pop-punk with crystal clear lyrical dissertation delivered while high on crystal meth (just an adjective) is the basis for “Fallen” by Emerson Vernon. So much is to be absorbed in the first 30 seconds that there’s no way to think this will be a track lacking a message. Broken-hearted and downtrodden from being lied to takes the message, and tempo, to a level of heights of love for someone, that falling (fallen), is the only way back down – metaphorically of course.

Vernon states that he possesses love for a woman, more than his own God, and even asks for forgiveness. No statement is more powerful than that as a declaration of love. The poetic rhymes continue to absorb like proverbs when we hear…

Descended from the heavens

Now my wings are on fire

So if I’m gonna burn

Then you can burn my desire

So well written and it delivers a lyrical message that transforms into a visual one. “Built heaven in my hell’s despair,” tells a tale of one who convinces themselves all is wonderful to the point that the happy reality is just in one’s head because truly it is misery. The adjective of meth being the fuel is descriptive of the track’s band performance. Speed is too slow a word to describe the pace. Its intensity makes your ears feel like they’ve been left behind in a race against Usain Bolt. Vernon’s vocals are also something perfectly aligned with the song’s entirety and are absolutely a highlight of this energetic and exuberant song.