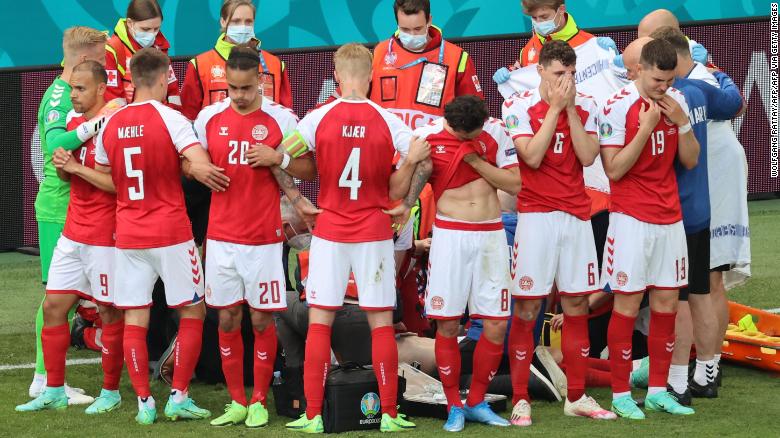 Danish soccer player Christian Eriksen is in “stable condition” Sunday morning and has sent greetings to his teammates, the Danish Football Association said in a statement.

‘Christian Eriksen, I love you’

After he collapsed, Eriksen’s Danish teammates formed a wall around him to protect the Inter Milan star from view as he was receiving treatment. Players from both teams, as well as fans in the stadium, were visibly distressed as Eriksen was being attended to by medics.
In Group B’s other match, Romelu Lukaku opened the scoring for Belgium over Russia and ran over to the camera to send a message of support to his Inter teammate. “Chris, Chris, sterkte jongen (Dutch for ‘wish you strength/all the best’). I love you!” he said.
In Goyand, South Korea, Eriksen’s former teammate Son Heung-Min scored a goal in his team’s 2-1 victory over Lebanon in a World Cup qualifier, and shouted “Christian Eriksen, I love you”, according to a tweet from his club Tottenham Hotspur.
Other goodwill messages from around the world flooded social media. Harry Kane, the England captain and former teammate of Eriksen, sent his love to the Danish talisman and his family in a tweet Saturday.
“Stay strong mate,” said Kane, who will be playing in his first game of Euro 2020 Sunday afternoon.