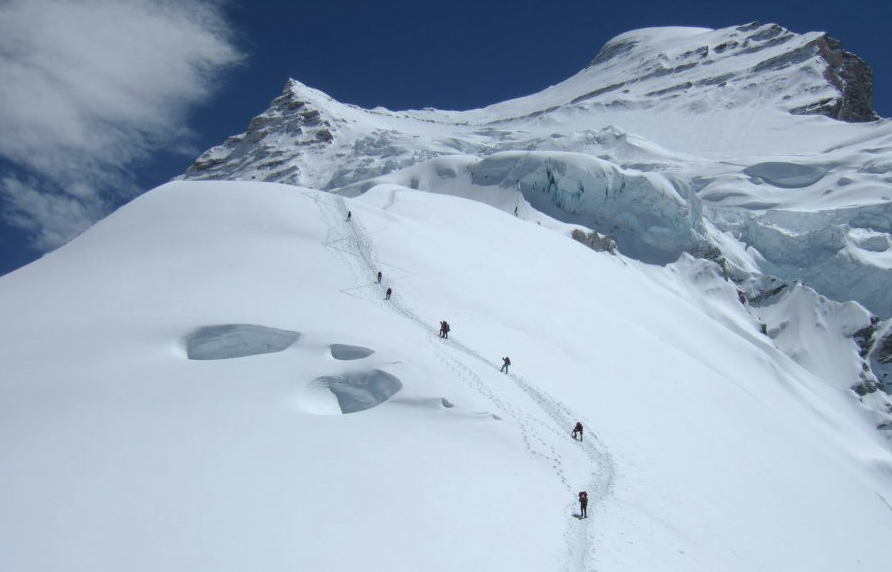 Cho Oyu is an 8,000 meter peak in the Himalayas, and a great climb for those who want to tackle an 8,000 meter peak, but aren’t sure they’re ready for something as big and difficult as Everest. It’s considered by many to be the easiest of the 14 or so 8,000-meter peaks in the world, but it’s still no walk in the park.

The mountain was first surveyed by British expeditions in 1935 and 1952; however, it wasn’t until 1955 that it was officially climbed. The first ascent took place on October 19th of that year and was led by Herbert Tichy, Joseph Jochler, and Sherpa Pasang Dawa Lama.

The trip starts out at Lukla airport, where we’ll wait for our flight from Kathmandu. We’ll stay overnight there before heading to Monjo for two nights. From Monjo we’ll enter the Sagarmatha National Park and hike through beautiful Sherpa villages like Namche Bazaar and Thyangboche before reaching our base camp at 5,400 meters.

Once we’re at base camp, we’ll spend up to a month acclimating to high altitudes by making gradual progress up the mountain every few days. We’ll establish a series of camps on the mountain as we go, until we can make our final push to the summit. From there, it’s all downhill! We’ll pack up our gear and head back down to Namche Bazaar where we can celebrate all that we’ve accomplished.

This mountain has about three main climbing routes, all of which are relatively easy. It is often used by climbers as a training climb before attempting to reach Mount Everest. It is also close enough to be visited during a Mount Everest expedition, and many climbers do both.

During the trip from ABC to basecamp, trekking from ABC to basecamp and on the climb itself, our Sherpas and western guide are there to help. Our high-altitude climbing sherpas are some of the best and will help you reach the summit safe and sound. Our western leader is a highly experienced, friendly, and well-organized professional with multiple ascents of Cho Oyu under his belt. Our skillful cook prepares delicious, fresh, tasty food and hot drinks at least three times a day.

We’re SummitClimb, and we specialize in climbing expeditions up Cho Oyu and many other peaks like Everest, Manaslu, Lhotse, Lobuche, Aconcagua, Elbrus, Ama Dablam etc. Our team has a wealth of experience on these particular peaks, and have been guiding climbers up it since 2005. If you’re looking for an incredible opportunity to take on one of the world’s most beautiful mountains, get in touch with us today!