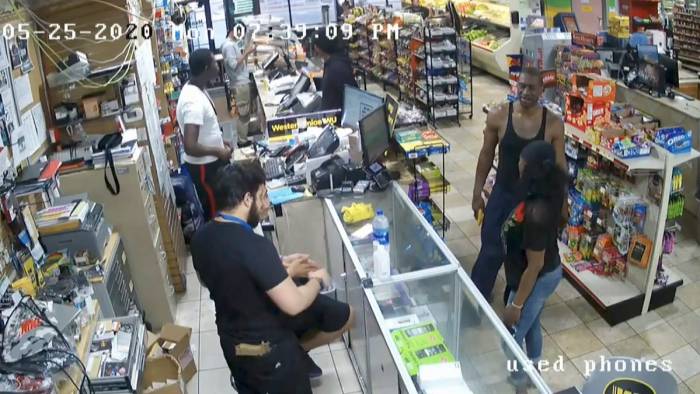 An employee at the Minneapolis corner store who suspected George Floyd gave him a counterfeit $20 bill last May testified in court Wednesday that he felt guilty knowing that their interaction led to Floyd’s death under former police officer Derek Chauvin’s knee.

“If I would have just not taken the bill, this could have been avoided,” Christopher Martin, a 19-year-old cashier at Cup Foods, testified in court Wednesday. He stopped working there soon after because he said he didn’t feel safe.

Martin’s testimony comes on the third day of Chauvin’s trial and after prosecutors called a number of bystanders to explain their interactions with Floyd and Minneapolis Police that fatal day. 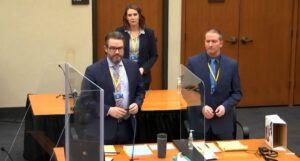 Martin testified that Floyd responded slowly and appeared to be high when he came into the store on May 25, 2020. Surveillance video played in court shows Floyd fiddling with items in his pockets and casually interacting with other customers and employees.

Floyd then bought a pack of cigarettes with a $20 bill that Martin believed to be fake because of its blue color and texture. After examining the bill closely, Martin told his manager, who twice told Martin and other employees to go out to Floyd’s vehicle and bring him back into the store to resolve the issue.

When Floyd refused, the manager told an employee to call police — a fateful call that ultimately ended with Chauvin kneeling on Floyd’s neck for nine minutes and 29 seconds.

Martin is one of a number of bystanders who have expressed survivor’s guilt about what they did and didn’t do leading up to Floyd’s death. On Tuesday, a high schooler who recorded and shared video of Chauvin kneeling on Floyd said she had lost sleep over the incident thinking of what else she could have done.

“It’s been nights I’ve stayed up apologizing to George Floyd for not doing more and not physically interacting and not saving his life,” she said. “But it’s not what I should have done, it’s what he should have done.”

His trial comes 10 months after Floyd’s death sparked a summer of protest, unrest and a societal reckoning with America’s past and present of anti-Black racism and aggressive policing.

Because of the Covid-19 pandemic, attendance is strictly limited inside the courtroom. The trial is being broadcast live in its entirety, giving the public a rare peek into the most important case of the Black Lives Matter era.

Hansen became combative with defense attorney Eric Nelson during Tuesday’s cross-examination, repeatedly taking issue with his questioning and responding with snark. “I don’t know if you’ve always got somebody die in opposite of you, but it’s very upsetting,” she said at one point.

After dismissing the jury for the day, Judge Peter Cahill admonished Hansen, telling her to answer questions and stop arguing. Upon her return to the stand on Wednesday morning, Nelson asked just one question to confirm she did not show the officers on the scene her ID.

Hansen was one of six bystanders who testified on Tuesday, along with a 9-year-old girl, three high school students and a mixed martial arts fighter. All arrived at the corner of 38th Street and Chicago Avenue in Minneapolis looking to buy snacks from a corner store or to simply get fresh air — only to witness Floyd’s last breaths.

“I was sad and kind of mad,” the 9-year-old testified. “Because it felt like he was stopping his breathing, and it was kind of like hurting him.”

Their harrowing testimony furthered the prosecution’s opening statement that asked jurors to focus on video of the 9 minutes and 29 seconds that Chauvin knelt on Floyd’s neck.

Nelson, Chauvin’s defense attorney, has argued that the case is more complicated than just the video. He said Chauvin was following his police use of force training and argued Floyd’s cause of death was a combination of drug use and preexisting health issues.

He also said that the bystanders morphed into a threatening crowd, which distracted the officers. In cross-examinations of Hansen and MMA fighter Donald Williams II on Tuesday, Nelson tried to get them to admit that they and the crowd were angry as Floyd slowly died. They insisted they were increasingly desperate, helpless and concerned.

“I grew professional. I stayed in my body,” Williams said. “You can’t paint me out to be angry.”

Genevieve Hansen, an off-duty firefighter, said police would not let her render aid to George Floyd.

Wednesday’s testimony began with a short cross-examination of Genevieve Hansen, an off-duty Minneapolis firefighter. She testified a day earlier that she was out for a walk on her day off last May and came upon Floyd struggling to breathe and appearing unconscious under Chauvin’s knee.

She tried to help Floyd and repeatedly asked police to check for a pulse, but they refused, leaving her feeling desperate and helpless.

“I tried calm reasoning, I tried to be assertive, I pled and was desperate,” she testified. “I was desperate to give help.”