Ren Guoqiang was also a spokesperson for China’s Defense Ministry and made bellicose remarks at democratic Taiwan, claiming that its future lay in “national unification” with the mainland.

Ren called his comments a response to recent reports about “collusion” between Washington, D.C., and Taipei. He was referring to both the Biden administration’s vaccination diplomacy and its advocacy for peace, stability, and prosperity across the Taiwan Strait. 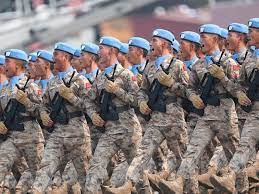 Ren stated that China is opposed to any form or military contact between the U.S.A and Taiwan.

At the monthly press briefing, a Chinese official stated that the U.S. must fully understand that China’s growth and development cannot be stopped by any force or person. He said that Taiwan’s ruling party must be “soberly aware” that Taiwan’s future lies in national unification.

Ren described the move to be “necessary in response to the current security situations across Taiwan Strait” and “the need to protect national sovereignty.”

After the G7 summit in England, a June 13 communiqué urged Beijing to cooperate in the next phase in the World Health Organization’s investigation into COVID-19’s origins. It also warned against unilateral changes in the status quo in South and East China Seas.

When asked about similar comments this week, Taiwan’s Foreign Ministry said that it wasn’t worth commenting on China’s emotional reactions.