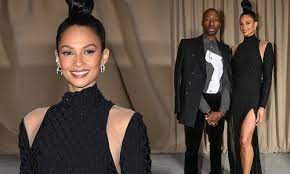 Alesha Dixon put on a spectacular presentation as she ventured out with Azuka Ononye for the British Vogue x Self-Portrait occasion at The Maine Mayfair in London on Thursday.

The Britain’s Got Talent judge, 43, looked sensational in a stylish gathering containing a leg blazing look as she ventured out with her accomplice, 40.

She cut a spectacular figure in a dark figure-embracing outfit with a warmer weather sweater and challenging leg parts which capitalized on her unlimited pins. 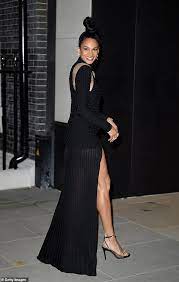 Adding to the flesh-flashing look was cut-outs at the shoulders, which gave an even sexier feel to the already smouldering ensemble.

Scraping her hair into a sharp bun, she was showing off her flawless features with a dramatic make-up look and dazzling silver earrings.

Her husband, who she married in 2017, donned a stylish ensemble looking sleek to rub shoulders with the stars at the glitzy bash. 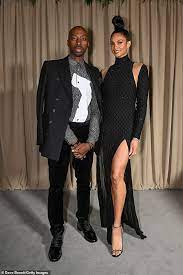 The outing comes after Alesha revealed how she has ‘transformed internally’, admitting it feels like she’s lived ‘three different lives’.

She appeared on Angela Scanlon’s Thanks A Million podcast and spoke candidly about how past experiences have shaped her into the person she is today.

Alesha was firm in the fact people should always try to find something to be grateful for – and that there should be a focus on what we have, not what we don’t.

‘I don’t know if it’s just this country, but we’re definitely a pessimistic bunch. And I think that actually, you know, no matter what struggles anyone’s going through, I think you can always find something to be thankful for,’ she remarked.

Admitting that her mantra is maintaining this positive outlook, the popstar, who rose to fame in the early 2000s as a member hip hop trio Mis-Teeq, believes that she has learnt a lot of lessons over the years and is frank about them.